Performance of the Asia Pacific hotel sector continues to improve – The HICAP Hotel Industry Conference (Asia Pacific) was held last month and STR, a global leader in CRE information and analytics in the hospitality sector, noted that the Asia Pacific hotel industry had reported continued performance improvement from the COVID-19 low points, as a result of strong domestic demand and holidays. 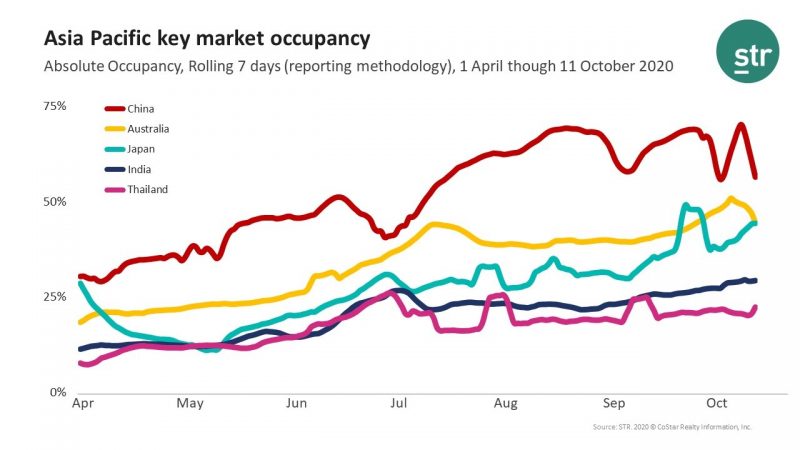 Australian hotel occupancy remains resilient – In Australia, occupancy bottomed in April at 19.8% (and RevPAR at just $23.59) but has since steadily improved. Even with a small drop following a tightening of restrictions, performance has remained relatively close to July levels. For the week ending 27 September, occupancy was 46.4% and RevPAR was $71.74.

Regional Australia outperforming – STR’s forward “STAR” data shows the next 12 months will see a continuation of the recent trend of weekend and school holiday peaks. This trend has benefited regional Australia, which has outperformed capital cities, and is expected to continue for the next 3 months as corporate travel is restricted and likely to remain subdued until 2021. 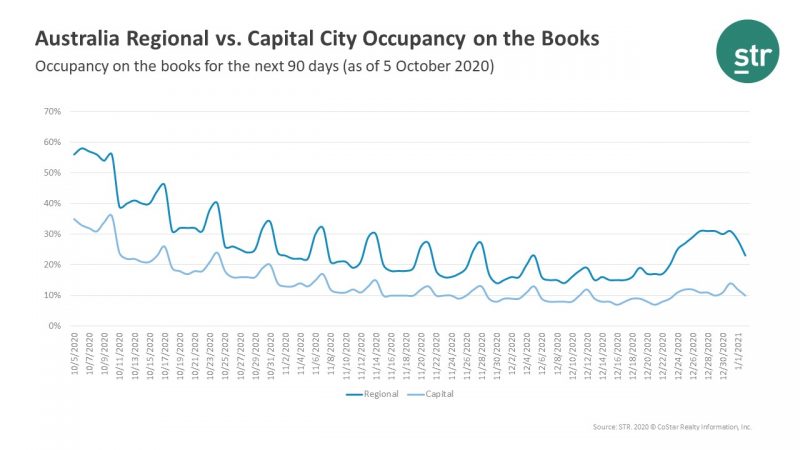 Demand fundamentals to be supported by domestic “staycations” – TRA (Tourism Research Australia) reports that Australians spend significantly more travelling internationally than overseas travellers spend in Australia, and domestic travellers already out-spend international visitors in Australia by a ratio of 2:1. While domestic tourists normally have different travel and spending patterns to overseas visitors (shorter trips and lower yields), we believe those tourists who would otherwise have holidayed overseas will exhibit a strong level of demand and support the market over the short-to-medium term.

Limited supply pipeline – The current supply of hotel rooms under construction is relatively scarce apart from in Melbourne where 25% of existing supply is expected to come online within the next 3 years. We are also seeing existing projects being postponed or reconsidered for alternative development and believe that beyond 2021 there will be limited supply across all major markets excluding Melbourne. Combined with the growing level of pent-up demand, this should temper oversupply concerns.

Outlook for the sector is positive – In the short term the hotel sector should be well supported by the opening of state borders, government initiatives to stimulate domestic tourism and consumer spending more generally, and pent up demand from Australians whose mobility has been heavily restricted. The hotel industry has proven itself to be resilient to previous market shocks and we expect this adaptability to also underpin a positive longer-term outlook. The supply pipeline is forecast to contract in most CBD markets and demand should gradually increase over time. Colliers anticipate that the market will begin to recover early in 2021, initially due to growth in domestic travel in H1 2021 followed by a sharp inflow from international travellers in the H2 2021. 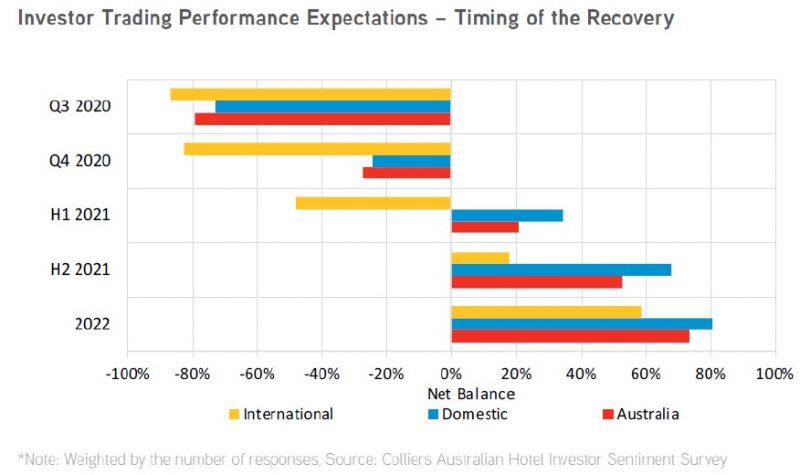 Short term uncertainty is providing excellent long-term investment opportunities – As projects are delayed or abandoned due to current uncertainty, key markets are set to benefit from upcoming supply constraints combined with the recommencement of domestic and international travel. This is providing us with an opportunity to gain exposure to an Australasian hotel recovery story.

Looking beyond the uncertainty – Our experience from operating in markets with divergent expectations has taught us the importance of acknowledging short-term uncertainty and looking beyond this to focus on longer term supply and demand fundamentals. While the major banks limit their exposure to the sector, our analysis supports the strategy of financing quality hotel projects and operators, particularly as our conservative valuation methodology limits any downside risk.

We see this as a unique opportunity for targeted investment into the Australian hotel market and are currently reviewing several attractive opportunities in Sydney, Hobart and suburban Melbourne.  CBD Melbourne is the one area of caution that would need to have any opportunity backed by an outstanding sponsor and property to overcome the indigestion of new supply that is going to make the pathway to full occupancy higher risk.

Dancing with the devil

The Partners Fund currently has 4% exposure to senior mortgages backed by Hotels in NSW and Tasmania. The average LVR of these loans is 53% and are performing with both…

Consumer staple retail and the opportunities within

The Partners Fund currently has 4% exposure to senior mortgages backed by Hotels in NSW and Tasmania. The average LVR of these loans is 53% and are performing with both…